The short answer: Chemistry in space.

Sounds awesome, doesn’t it? A completely unbiased answer would be: “Yes”.

But in all seriousness, for me personally, this is indeed the case. In my view, astrochemistry abides by the abstract. Weird chemistry. Chemistry that, to the novice, makes absolutely no sense. In a sense it constitutes a “chemical objet d’art”.

To get our heads around why this supposedly doesn’t make sense, we should break down our predetermination of “space” and “chemistry”.

Space isn’t entirely empty. Despite the vast regions of black edifices between the stars in the night sky, those dark prairies are full of diffuse matter. Our presuppositions may dictate that besides the galaxies, stars, planets, planetesimals, asteroids, etc., space is a vacuous hollow. This is a major misapprehension that may dilute our imagination in terms of the potentialities of chemistry in these parts of space.

But how could chemistry proceed in environs ruled by almost zero temperatures, strong ultraviolet radiation fields and cosmic rays whilst simultaneously being scarcely populated by atoms? This is where our preconceptions of general chemistry may involuntarily hinder our perception of the possibility of astrochemistry. 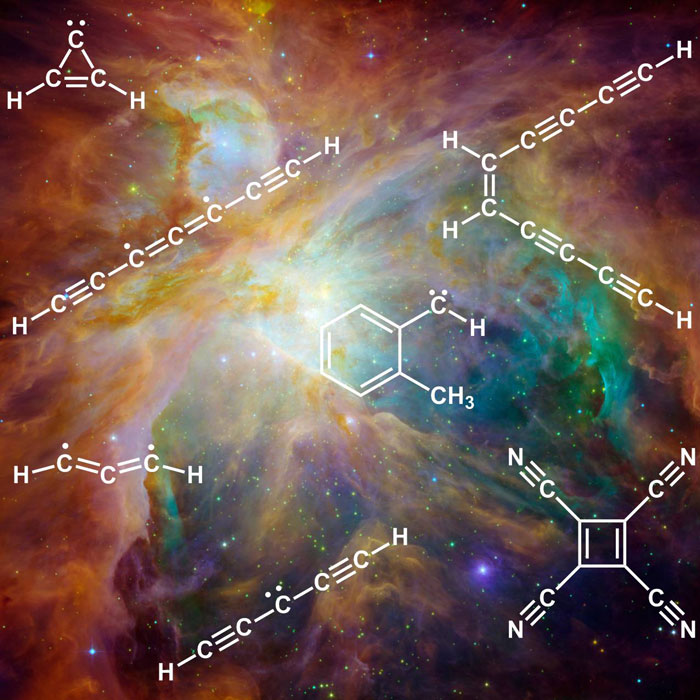 Weird molecules in space. Figure is totally stolen without permission from the home page of Robert J. McMahon’s research group at the University of Wisconsin. http://mcmahon.chem.wisc.edu/

Chemistry, we learn, is full of rules that are specifically designed and put forward to help us understand the characteristics, behavior, and physical properties of the elements and their molecular amalgamations.  The Periodic Table, the Octet Rule, classical (“Arrhenian”) kinetics, the laws of thermodynamics; all are used to train our chemical instincts and insights. These give rise to our gut feeling that space and chemistry shouldn’t mix. UV radiation destroys molecules. Atoms stop moving at almost zero temperatures. Etc.

This was indeed the prevailing consensus amongst scientists until the late 1960’s when small molecules like water, carbon monoxide and formaldehyde were discovered in interstellar clouds. These discoveries were made by detecting and analyzing spectroscopic fingerprints of these molecules by analyzing microwave spectra from stellar objects, recorded by terrestrial telescopes.

A plethora of molecules have now been detected in space.

The presence of these molecules cascaded in a new research paradigm; searching for molecules in space, how they could be formed, and how they would affect the development and evolution of molecular clouds in space. These objectives currently represent the trichotomy of modern astrochemistry, namely observations (where astronomy meets spectroscopy), experimental work (where experimental physical chemistry plays a central role), and astrochemical modeling (where Newtonian and quantum mechanical behaviors of atoms and molecules are accounting into sophistical computer models of various environments in space).

Spectroscopy further revealed the omnipresence of dust particles, silicon dioxides. Their presence was particularly conspicuous in stellar nurseries, the birthing pools of stars. Around nascent stars, an envelope of dust particles is gravitationally suspended by the star’s mass. The gravitational pull from the star causes the dust cloud to spin around it, just as the planets revolve around the sun in our solar system.

In the furthest reaches of the cloud, where the stellar radiation is dilute, the temperatures can range from 3 – 50 degrees above absolute zero (3 – 50 K). Under these temperatures, small molecules such as H2O, CO, NH3, O2, N2, H2CO, etc., accrete onto the surfaces of these dust grains, from the extremely diffuse gas phase, that mostly comprises molecular hydrogen, H2. Upon processes such as UV-irradiation, atom bombardment, electron / ion scattering and X-ray irradiation, reactive radicals can form in these ices that start to react with other present compounds, or recombine with other radicals to form larger, more complex molecules.

The anatomy of an interstellar dust particle and the processes which its accreted material undergoes.

The most pertinent research questions of modern astrochemistry include: “Can biological precursors or life’s building blocks, form in space?”, “How did life begin on Earth?”, “How are abstract and weird molecules, observed to be present in the interstellar medium, formed?” What are the compositions of planets around distant stars?” And more.

Astrochemistry seeks answers to some of the fundamental questions humanity is yet to answer. It is by nature and necessity, a collaborative effort of astronomers, physicists, chemists and everybody who identifies themselves somewhere in betwixt.

I, for one, can’t wait to see where astrochemistry will lead us and what mysteries it will uncover.

P.s. Check out the website http://www.astrochymist.org/ for reviews of various books of astrochemical relevance (many of which I’ve read and would recommend but even more of which I’ve yet to read), a comprehensive Astrochemistry FAQ, a nexus of the latest astrochemically relevant publications, and a hell of a lot more! Honestly, I just found this website while writing this post. I believe I’ve found a new favorite website! (Sorry dictionary.com)

One thought on “What is astrochemistry?”