Michael Bay is not particularly known within the scientific community as someone who cares about accurate representations of scientific principles (e.g. Armageddon… All of it). Nonetheless his 1996 release, The Rock, is one of my favorite action films and probably his best ever film release in terms of quality movie-making. Without spoiling too much of the plot, it involves a disillusioned U.S. army general that steals a bunch of rockets armed with poisonous gas to hold the city of San Francisco under ransom for compensation for his soldiers whom had fallen in combat and had been disavowed by the U.S. government due to the covert and reticent nature of their reconnaissance mission. Yikes. The FBI enlists the assistance of a biochemist played by my own personal hero and spirit animal, Nicholas Cage, and James Bond. 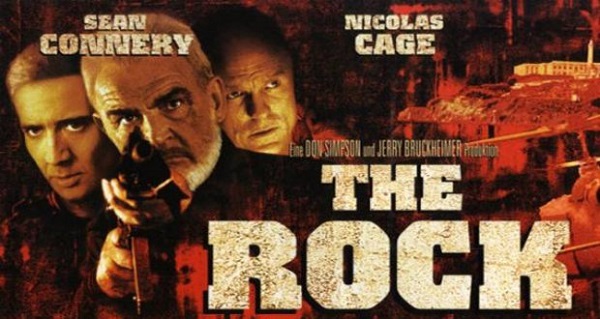 Not even kidding. There is no other way of putting it. Sean Connery plays a British secret agent who was captured by the American government and held without trial ever since. The way I see it, The Rock and the James Bond movies take place in the same universe where Connery’s Bond is captured sometime after his last exploits in the 007 franchise. But I digress.

The plot is perfect. The casting is perfect; the music is especially perfect, the pacing, the action, the climax, the heroes’ and villain’s arcs. It’s all exemplary. It is the perfect action movie… except for the science perchance. But it’s still damn close.

The aforementioned toxic gas is called VX-gas and even though it sounds made up, it is entirely real. Its systematic IUPAC name is ‘Ethyl ({2-[bis(propan-2-yl)amino]ethyl}sulfanyl)(methyl)phosphinate (pictured below). 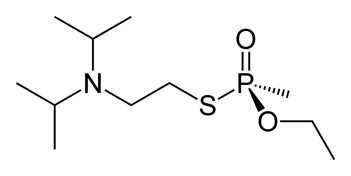 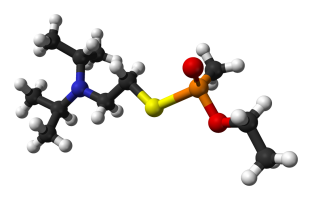 The film allows this toxin a corrosive nature that results in exposed characters being melted prior to death by asphyxiation. The deliquesce, face-melting property is, however, completely made-up, albeit pretty cool. (Movies are allowed a dose of artistic license here and there, right?) However, its toxic properties are quite real and are adequately represented in the film. I.e. this is a severely potent neurotoxin.

To explain how the toxin works, we need a crash course in neurochemistry. Bear with me.

The human body withholds an immense network of interconnected neurons; cells who are excitable by electric charges and thus have the ability to receive, process, and transmit information through electronic and chemical signals. In layman’s terms you can imagine an electrical domino effect, where an external stimulus (like a kick in the nuts) leads to a sudden local response in the affected area. Electrical charges (i.e. aforementioned local response) are moved from one neuron to the next all the way up to the brain where signal is interpreted as atrocious pain.

One of the principal molecular components that allow the electrical signals to be transferred from neuron to neuron is called Acetylcholine (ACh).

In biochemistry, usually every molecule has its associated enzyme whose sole purpose is to break the molecule down into (relatively) inert components. For ACh, that would be Acetylcholinesterase (AChE). 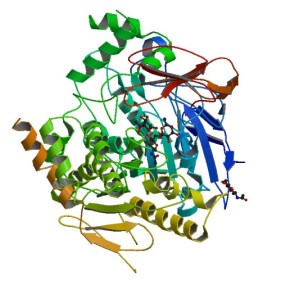 Briefly, AChE’s job is to break ACh down into acetic acid and choline which cannot perform the molecular task that ACh has.

Now, the function of ACh in terms of transmitting neurosignals is as follows: (i) ACh is released into the region between neurons or a neuron and a receptor cell (called a synapse), (ii) ACh binds to receptors at the adjacent neuron, (iii) the binding of ACh causes ion channels to open and allows positively charged ions (plus-charged sodium atoms) to flow into the adjacent neuron or other cell, (this is sort of the chemical equivalent of opening a door with the right key) (iv) the ACh in the synapse is then broken down by AChE into acetic acid and choline, (v) and finally choline transports back into the neuron where it is transformed back into ACh with help from another enzyme called Acetyl Coenzyme A. 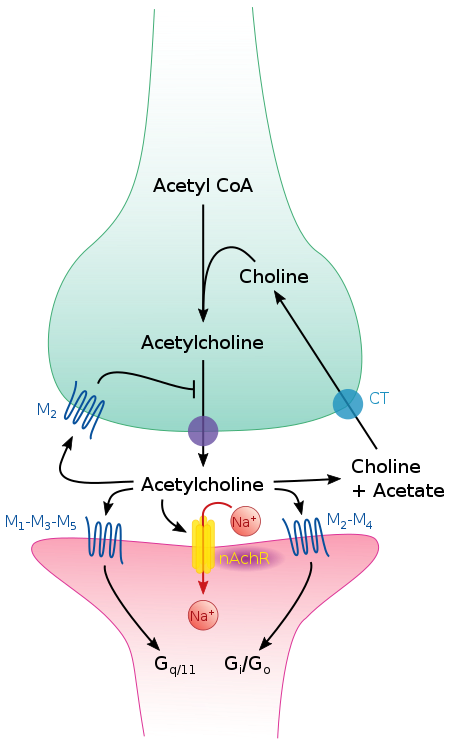 Schematic of the molecular role of Acetylcholine in the synapse between neurons.

Phew. So, where does VX come into this picture?

Well. It is an acetylcholinesterase inhibitor (AChEI). It works by blocking the function of AChE. The original purpose of breaking ACh down is to avoid a state of constant muscle contraction. If ACh is not broken down, it keeps the aforementioned ion channels open and thus would induce muscle spasms by constant charge flow.

What VX does is that it binds to AChE without being broken down the way ACh would be. Therefore ACh can’t be broken down by AChE and which results in the accumulation of ACh in the synapses. This leads to constant stimulation and eventual fatigue of all ACh receptors. As a result, anyone affected by the toxin exhibits violent contractions and muscle twitching. Prolonged exposure leads to flaccid paralysis of all of the body’s muscles, including the diaphragm muscle that causes death by asphyxiation.

The potential fatal dose of VX is only slightly higher than the dose having any effect at all and the effects of a fatal dose are so rapid that there is little time for treatment.

In one of the last scenes of the film where his character is subjected to VX poisoning, he does exactly what the toxin is expected to do. He convulses, spasms, and finally lies on the ground expecting to die, utterly fatigued. Cage must have done his homework on the effects of VX gas because his reaction to the toxicity is utterly believable.

On the other hand, another creative license the film took to up the ante, was to make the only defense against VX be an intracardiac injection (needle to the heart) of atropine rather than intramuscular injection (e.g. into the thigh or buttocks). But let’s be honest, watching Nicholas Cage stabbing himself in the chest with a needle is much cooler than watch him inject a needle into his ass. That’d be more appropriate for his film choices of the past 10 years rather than his flawless 90’s career.

Exploring the World of Heavy Music